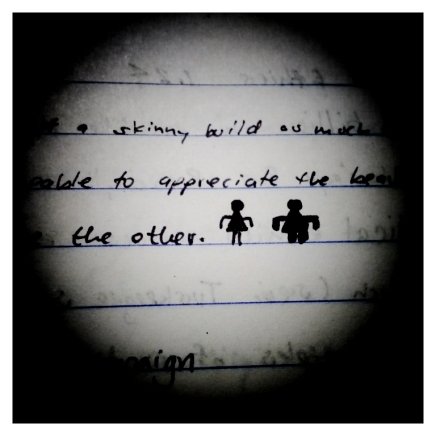 The contemporary concept of beauty is not so much the idealization of the skinny build as much as it is the condemnation of the obese and overweight. We are equally capable to appreciate the beauty of both body forms, but we choose to love one and hate the other.

I remember once remarking to a friend that I felt obesity and the shame associated with it was worthwhile and good. Obesity is unhealthy, undoubtedly. Our bodies were not created to support incredible amounts of weight. My line of thought assumed that the shame associated with an obese person would be cause for them to lose unnecessary pounds. My friend, however, argued to me that they should not have to be shamed. That is, they should not have to endure public humiliation. My friend is a very sensitive and thoughtful person. She made me consider what it would be like to be obese or overweight. Instead of being a detached intellectual, she pressed me to empathize. If I were obese, would shame be enough to make me want to lose weight? It’s nice to think, “Yes,” but we all know life isn’t that easy.

If you are obese or overweight, you are still beautiful–but this does not mean that you should be happy remaining obese. Treat your body the way it should be treated–and this extends beyond weight. Beauty is how you maintain your body, personality, and beliefs; the maintenance of your individual parts into a coherent and beautiful whole. It is something we all will be working toward for the rest of our lives. It seems that today, however, we are stuck on the idea of beauty merely being our appearance and no more.

Oh shhhhhhhh! Darren Sharper! One of the most hardest hitting safetys in the league!

If you know nothing about the bounty program in the NFL, let me summarize. The New Orleans Saints had a system in place in which their defenders were paid bonuses of thousands of dollars for knocking players on the opposing team out of the game. Basically, they were given incentive to intentionally hurt other players.

“Oh gosh, that sounds awful,” you might think. Yes, it is awful. I particularly found this quote by Cam Newton, QB of the Carolina Panthers and a target on the bounty list, very moving:

“If I’m a running back, if I’m a receiver, if I’m a linebacker, if I’m a D-tackle, you always have to respect that other person’s career because they’re feeding families just like I’m trying to feed my parents,” Newton told the Los Angeles Times. “And if you take those joints, those ligaments away by taking a cheap shot, it’s bigger than one, little `Yes, we took down their starting quarterback.’ This quarterback can’t even throw no more because you took a late hit on him. Yeah, it’s 15 yards. But you’re limiting this guy’s whole career.”

I can too easily imagine men acting tough, claiming they would pound the snitch that snitched. That pisses me off. That’s not manly–that’s barbaric. This is the NFL–not a battle. If you want blood and guts, I’ll build you a time machine so you can watch the gladiator games. That ought to quench your thirst for blood.

That’s the problem of the NFL. It’s such a violent game inherently, and the league is trying to protect itself from becoming an unregulated fighting match. People want to see bigger booms, louder smacks, and nastier collisions. But we forget that these are young and grown men sacrificing their bodies for our viewing pleasure.

Go ahead and lecture me on brotherhood and camaraderie if you think this bounty program is something normal and to be expected. I won’t accept that. Just read Newton’s quote. The NFL is a job. It’s full of men trying to provide for themselves and their families. And you think providing incentive to harm those men, to decapitate them from their work? That’s like me coming after your dad with incentive to get him fired from his job.

Bounties in the NFL are stupid. They are a moral corruption of the game. If you defend them (fans or NFL players), you need to reassess your moral character. Bounties are for Boba Fett.

Newton’s quote also gives me a more profound respect for him.

Of all Christian artists, I like David Crowder Band the most. He is funky and cool. He sings about Jesus in his own style. He isn’t worship music that Evangelical churches usually use in their services. He is music. He is the type of Christian artist that I like. I’m sad that he and his band are calling it quits.

On their last album, there is a song titled “Oh My God”. Likewise, Gym Class Heroes has a track called “Oh My God“. Same titles, same words, but different meanings.

Did you know that hymnals use “O” instead of “Oh” to demonstrate a different use of the phrase, “Oh my God”? Just kidding. I made that up. I don’t know why sometimes it is printed “O” instead of “Oh”. Sometimes “O” looks cleaner, and, in traditional theology, Jesus is pretty clean. So maybe that’s why.

Some people might say “Oh my God” is a profanity, since they might see it as taking the Lord’s name in vain (Exodus 20:7). I try to avoid it because I was brought up in that belief, and I sort of do believe that I am misusing God’s name if I say that.

So my overall point is: Think about what you say. We all can say the same words, but those words can mean very different things. This also means that I might be able to say the f-word in a very appropriate way, but another doofus might use it in an inappropriate way. Yet, even if we use those words in the way we meant to, it could mean entirely different to someone else.

So I guess I might be proposing that we never speak to each other again.

When Linsanity first swept America, I was hesitant to jump on the bandwagon. I don’t like bandwagon fans, and I think I have the ultimate reason to dislike bandwagon fans: After Michael died, thousands of “fans” came out of the woodwork. All I’ll say is, “Sure.” Honestly, though, it’s really stupid to try to prove you’re a “better” fan than bandwagoners or fair-weather fans. A fan is a fan. You both love the same person or thing for similar reasons; there’s no need to hate or classify. If anything, trying to prove you are a “true” fan is selfish. I find it very annoying. In the end, I’m glad so many people came to love Michael’s music. Sometimes I wish people would have loved it sooner.

Concerning Lin, though, I was adamant that I wouldn’t be like “those” Michael fans. I thought I would appreciate Lin, but not necessarily follow him.

Well, that plan fell through. I was caught in Linsanity, and of course my mind explored why. I love Jeremy for a number of reasons. Wherever he ends up in the NBA, I’ll be a fan. He’s made me love the Knicks, thus keeping my sports allegiance to New York (Giants and Knicks; if I watch baseball . . .).

Concerning Linsanity, though, a lot of my basketball savvy friends weren’t buying into Lin. I’ll agree: the media definitely overhyped him. I will argue, though, that he had to be overhyped. He is the underdog story inherent. I want to clarify, though, that I am not a Jeremy Lin fan simply because he is Asian American and happened to stumble into the limelight. That’s only part of my reasons. Let me share with you why Jeremy Lin gets me so excited!

So much for trying to keep this list brief. Go Knicks! Go Lin!